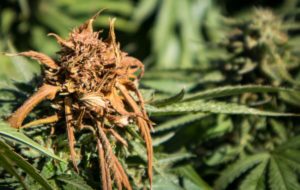 Since Senate Majority Leader Chuck Schumer unveiled a draft of his federal marijuana legalization bill in July, questions have begun percolating about what cannabis businesses stand to win or lose should the groundbreaking legislation become law.

Longtime industry experts agreed that big, well-capitalized companies stand to reap the most gains in a post-federal legalization world, whether it’s Schumer’s bill or another measure that eventually becomes law.

“It’s going to be the big dogs that win,” predicted Nic Easley, the CEO of Colorado-based 3C Cannabis Consulting.

That’s not to say there won’t be room for smaller companies, Easley and others agreed.

That’s because the bill – and its likely successor’s incoming congressional sessions – focuses heavily on social equity.

It also would likely allow for interstate commerce, which could be a savior for many small craft cannabis farmers.

But larger businesses are much better positioned than their mom-and-pop counterparts, experts agreed.

Below are some thoughts on likely winners and losers from Easley, California-based Morgan Paxhia, principal at Poseidon Asset Management, and New York-based Frank Colombo, director of data analytics at Viridian Capital Advisors:

How it’s likely to play out

For starters, Easley, Paxhia, and Colombo doubt Schumer’s bill will succeed this year or next.

They said the legislation faces too many hurdles and question marks, ranging from a lack of support from President Joe Biden to the fact that no Senate Republicans have voiced support for the proposed bill.

But the three experts did agree that federal legalization is all but inevitable, and Schumer’s bill offers a glimpse of how the industry landscape might change in the not-too-distant future.

“It’s not a question of if this is going to happen. It’s when,” Easley said.

In the interim, Paxhia said, larger vertically integrated companies are poised to get even bigger through continued mergers and acquisition deals.

For example, Florida-based Trulieve’s $2.1 billion deal to acquire Arizona-based Harvest Health & Recreation – announced in May – could mark a resurgence in cannabis megamergers.

That’s in large part because the cost of capital for larger businesses is much lower than for smaller companies.

Moreover, Congress has failed repeatedly to pass the SAFE Banking Act, which would give marijuana companies banking access and free up more funding.

“That’s where I see the biggest concerns of all this. And a very easy way we can measure this is in cost of capital.”

The largest multistate operators, Paxhia noted, have successfully navigated the banking and fundraising fields to the point where they’ve been able to solidify funding deals with interest rates below 10%, whereas smaller businesses are still paying interest rates between 11% and 20%.

“That is taking away from their ability to grow and to become big,” Paxhia said of the smaller companies.

Illinois-based MSO Cresco Labs announced earlier this month it closed on an upsized $400 million senior secured loan with a reduced annual interest rate of 9.5%, for instance.

In a news release, Cresco CEO Charlie Bachtell noted that “we have secured funding to capitalize on new growth opportunities.”

But, if Congress were to approve the SAFE Banking Act and nullify the negative impacts of Section 280E of the federal tax code, then the winners would likely be smaller MSOs and single-state operators, Colombo said, because that would put them on a more even playing field with the so-called “big dogs.”

“If banking reform passed and 280E reform passed, those two things together would be tremendously beneficial for the smaller competitors,” Colombo said.

Who stands to benefit

Anyone aligned with larger businesses stands to benefit under federal legalization.

Paxhia cited Herbal as an example because the Southern California cannabis distributor also has connections with the American natural-foods industry, which could be used for interstate marijuana shipping.

“Winners over the intermediate period are likely to be ones with more balanced footprints and not overly exposed one way or another,” Paxhia said.

That’s also why Colombo and others expect federal legalization would be like throwing gasoline on the M&A fire that’s already spreading through the industry.

Colombo said that’s in part because interstate commerce is realistically not on the horizon anytime soon.

He believes many states – and thousands of municipalities and counties – would try to protect their own markets. They would view interstate commerce as a threat, not a boon.

“True legalization would also spur … more of an M&A bid for the smaller companies,” Colombo said.

But if interstate commerce becomes a reality, then there could be entry points for smaller businesses to compete and thrive, Colombo added.

“There’s a good case to be made that, if you truly have interstate commerce and complete federal legalization, it benefits the small U.S. competitors,” he said.

“My overall feeling is the states are going to fight tooth and nail against that.”

Colombo noted there would likely be billions of dollars spent on cultivation and manufacturing infrastructure in New York alone in the next one to two years as medical marijuana companies operating there build out facilities in the wake of the state’s legalization of adult use.

“You spend what we think has got to be like $2 billion over the next two years … and that’s just build-out costs,” Colombo said.

The same would be true for national marijuana product brands that have a multistate footprint but might not be prepared to deal with U.S. Food and Drug Administration inspections the way copackers in mainstream food and beverage industries can, Paxhia noted.

“How many of these facilities are going to be food-grade or get through the FDA process? That’s not cheap,” Paxhia said. “That’s an area where I do see a lot more centralization.

“You need large-scale manufacturing to be able to handle those costs. That could be a big change here in the U.S., these small (marijuana edibles) kitchens. It’s just not going to make sense to go through all that.”

Easley agreed, arguing that microbusiness licenses or stand-alone social equity permits will not be solid business models over time.

He pointed to Michigan, where many entrepreneurs are pinning hopes on microbusiness permits.

“They think these micro licenses or smaller license types, it’s so expensive on a compliance basis. … You’re literally going to lose money over five years, with what the supply is and the cost of the market is.”

California businesses at a disadvantage?

Many industry losers following federal legalization could prove to be California companies, given how much it costs to run a business there, all three experts said.

But, Paxhia noted, there are still “thousands and thousands” of grape growers in the state that cater to winemakers, and there’s no reason the same couldn’t prove true for marijuana farmers.

Another big question will be how interstate commerce works and whether national shipping is viable – or whether some states will try to throw up barriers to stop marijuana from being transported across their borders, Easley and Colombo said.

Either way, one of the bigger winners under interstate commerce would be companies with established national shipping lanes.

“The thing that nobody really considers is that interstate liquor distribution and alcohol … control the game,” Easley said. “Who are the interstate licensed distributors? That’s what gets the product into (stores).”